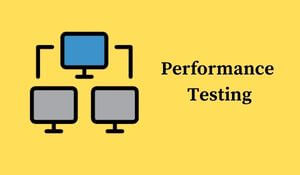 1.Explain what is performance testing?

Performance testing is done for quality assurance. It involves testing software applications to make sure that the software is working well under their expected workload.

3.List out what are the common performance problems that users face?

6.Why has JMeter become a natural choice of tester when it comes to performance testing?

JMeter tool has benefits like
It can be used for testing both static resources like HTML and JavaScript, as well as dynamic resources like Servlets, Ajax, JSP, etc.
JMeter has a tendency to determine the maximum number of concurrent users that your website can handle
It provides a variety of graphical analyses of performance reports.

7.Mention what all things are involved in the Performance Testing Process?

Right testing environment: Figure out the physical test environment before carry performance testing, like hardware, software and network configuration.
Identify the performance acceptance criteria: It contains constraints and goals for throughput, response times and resource allocation.
Plan and design Performance tests: Define how usage is likely to vary among end users, and find key scenarios to test for all possible use cases.
Test environment configuration: Before the execution, prepare the testing environment and arranges tools, other resources, etc.
Test design implementation: According to your test design, create a performance test.
Run the tests: Execute and monitor the tests.
Analyze, tune and retest: Analyze, consolidate and share test results. After that, fine tune and test again to see if there is any enhancement in performance. Stop the test, if CPU is causing bottlenecking.

8.List out some of the parameters considered for performance testing?

9.List out the factors you must consider before selecting performance tools?

10.Mention what is the difference between JMeter and SOAPUI?

It is specific for web services and has a more user-friendly IDE
It does not support distributed load testing
For most IDE, it has plugin support.

11.Mention what is the difference between performance testing and functional testing?

To verify the accuracy of the software with definite inputs against expected output, functional testing is done.
This testing can be done manually or automated
One user performs all the operations
Customer, Tester and Development involvement is required
Production sized test environment is not necessary, and H/W requirements are minimal.

12.Mention what is the benefit of LoadRunner on testing tools?

13.Explain what is Endurance Testing and Spike Testing?

14.Explain what are the common mistakes done in Performance Testing?

15.Mention the steps required in JMeter to create a performance test plan?

16.Explain how you can execute spike testing in JMeter?

In JMeter, spike testing can be done by using the Synchronizing Timer. The threads are jammed by synchronizing the timer until a specific number of threads have been blocked and then released at once, creating a large instantaneous load.

17.Explain what is the throughput in Performance Testing?

18.Mention what are the phases for automated performance testing?

19.Mention what is the difference between the benchmark testing and baseline testing?

20.Mention what are concurrent user hits in load testing?

In load testing, without any time difference, when multiple users hit on the same event of an application under the load test is called a concurrent user hit.

21.Why is Performance Testing performed?

Example: Customer likes to withdraw money from an ATM counter, a customer inserts a debit or credit card and waits for the response. If the system takes more than 5 min. then according to requirements, system functioning fails.

22.What are tools of performance testing?

LoadRunner(HP): this for web and other application. It provides a variety of application environments, platforms and databases. Number of server monitors to evaluate the performance measurement of each component and tracking of bottlenecks.

WebLoad(RadView): it allows comparing of running test vs. test metrics.

Silk Performer (Borland): allow prediction of behavior of e-business environment before it is deployed, regardless of size and complexity.

23.Explain the sub-genres of Performance testing.

Following are the sub-genres of Performance Testing:

Load Testing: It is conducted to examine the performance of application for a specific expected load. Load can be increased by increasing the number of users performing a specific task on the application in a specific time period.

Stress Testing: It is conducted to evaluate a system performance by increasing the number of user more than the limits of its specified requirements. It is performed to understand at which level application crashes.

Volume Testing: This is used to test an application in order to determine how much amount of data it can handle efficiently and effectively.

Spike Testing: what changes happens on the application when suddenly large number of user increased or decreased.

Soak Testing: It is performed to understand the application behavior when we apply load for a long period of time what happens on the stability and response time of application.

24.What is performance tuning?

Hardware tuning: Optimizing, adding or replacing the hardware components of the system and changes in the infrastructure level to improve the systems performance is called hardware tuning.

25.Explain the basic requirements of the Performance test plan.

Any Software Performance Test Plan should have the minimum contents as mentioned below: