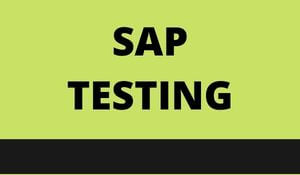 SAP stands for System Applications and Products. It provides customers the ability to communicate with common corporate databases for a comprehensive range of applications. It makes the business process work efficiently

SAP testing helps to detect and rectify errors at all project phases. So it gives high confidence that the SAP application supports the business process as per organization requirements from the day of the go-live phase.

3. What are the types of tests are used to test the SAP R/3?

The important types of SAP tests are

4. What is Integration testing?

After all SAP modules are implemented, Integration testing is used to test whether all the posting are working properly that cuts across SAP modules, for e.g O2C, P2P, and so on.

5. What is user acceptance testing?

User acceptance testing is done at the end-user level for those who are executing applications. They run and test the scenarios if any defects are found, the configuration team members resolve these defects during this test.

6. What is Performance testing?

It is used to test for determining the time taken to perform the actions. It helps to determine the system to meet and fulfill the service level agreement.

7. What is the meaning of STLC? Why do we use STLC?

Software Testing Life Cycle (STLC) consists of all the steps that are performed in a specific way to ensure that quality goals are met and each step has specific goals and deliverables.

STLC is used to improve the quality of a software product and to make it capable to meet the business requirements to achieve certain goals.

Tools useful for SAP Testing include,

9. Name a few modules on which SAP testing can be performed.

10. Mention what are the challenges faced during SAP Testing?

During SAP Testing challenges faced is a Valid combination of test data required for testing. All the critical interfaces should be determined, and their connectivity should be established with corresponding test systems To recognize the business processes which are suitable for test automation Identify negative testing conditions.

11. Mention what are the types of work processes in SAP?

In SAP, types of work processes include being:

12. Mention what is the difference between developer trace, System trace, and System log?

The difference between developer trace, System trace, and System log

System Trace: It is used when you want to record the internal SAP system activities

Developer Trace: It contains technical information for use in the event of issues with your system. Using the entries in the developer traces requires sound knowledge of the host systems in which your SAP system is running

System Log: You can use the log to highlight and rectify errors that occurred in your system and its environment.

13. What is the purpose of using Navigation in SAP Testing?

SAP testing navigation ensures that you cover each module of your SAP system and at least one test to be performed for each functionality.

It also reduces the manual testing effort and covers most of the testing paths in an SAP system. OPA tests can be performed to check SAP Testing – Navigation.

14. What is Screen flow logic in SAP Testing?

Screen flow logic in SAP Testing is like an ABAP code and it is used to contain the processing blocks. It contains a procedural part of the screen and is created in screen painter and this screen painter is similar to an ABAP editor.

Variables are parameters of a query that are set in the parameter query definition and are not filled with values until the queries are inserted into workbooks. There are different types of variables that are used in different application: Characteristics variables, Hierarchies, hierarchy nodes, Texts, Formulas, Processing types, User entry/Default type, Replacement Path.

17. What are the different types of source system?

18. Why choosing a right strategy is more important than choosing a tool for SAP Testing?

Choosing the right strategy is important for SAP Testing because,

Bex stands for Business Explorer. Bex enables the end-users to locate reports, view reports, analyze information and can execute queries. The queries in the workbook can be saved to their respective roles in the Bex browser. Bex has the following components: Bex Browser, Bex analyzer, Bex Map, Bex Web.

20. What is the significance of ODS in BIW?

An ODS Object serves to store consolidated and debugged transaction data on a document level (atomic level). It describes a consolidated dataset from one or more InfoSources. This dataset can be analyzed with a BEx Query or InfoSet Query. The data of an ODS Object can be updated with a delta update into InfoCubes and/or other ODS Objects in the same system or across systems. In contrast to multi-dimensional data storage with InfoCubes, the data in ODS Objects is stored in transparent, flat database tables.

AWB stands for Administrator WorkBench. AWB is a tool for controlling, monitoring, and maintaining all the processes connected with data staging and processing in the business information warehousing.

22. What is SAP Test Acceleration and Optimization?

SAP Test Acceleration and Optimization TAO 2.0 is a tool that is used to create automatic test cases during Regression testing of a system. It helps SAP customers to create different test components from the screens of a transaction and parameterizes them.

These test components are created normally for one transaction code and later can be combined to test scenarios. It can be easily integrated into the Business Process Change Analyzer in SAP Solution Manager.

23. What is the purpose of consolidation tab in SAP TAO?

Consolidate is known as a process to combine SAP TAO components with inbuilt components to create test scenarios as single transactional business components. It allows you to collect multiple test components into one test.

24. How to connect to SAP TAO to SAP solution Manager?

Go to SAP TAO login and select SAP SOLMAN in the list. This list of systems is SAP TAO is fetched from the configuration file of SAP logon. So to add a system in SAP TAO, you need to add a new system in SAP Logon and refresh the list in TAO.

25. What is the use of Process Flow Analyzer in SAP TAO?

Process Flow Analyzer is used to automatically find out the user interfaces used in transaction codes executed in an SAP system. It automatically creates the test components and uploads them to Quality Canter. It is also used to identify the sequence of test components as per user actions and creation of spreadsheet values.